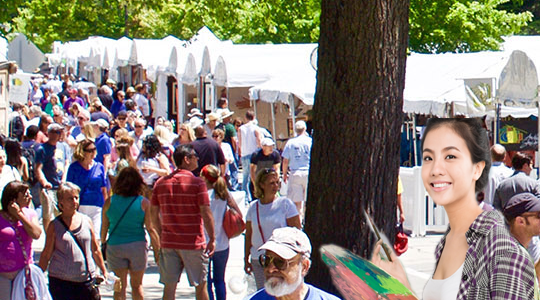 The Spirit Mountain Verizon HP Tesla Salem Art Fair (Presented By Facebook)—an Oregon staple that continues to attract dozens of recurring visitors to Bush Park each July—has decided to show some love to the Willamette Valley, by featuring one of its best artists.

While most exhibitors at the fair are usually well- off early retirees from Silicon Valley, one local woman (whose name will remain anonymous, per request of the event organizers) has been proudly asked to "sell her trinkets or whatever" in the parking lot for the event.

"This will really give the event a ’local’ feel," event organizer and Amazon investor Allison McKenzie told Saucetown. "Of course, we also expect people to flock to Sonoma Stick Figurines and San Fran Bran Muffins, as well. That’s why we partnered with Washington Mutual to provide no-limit ATM machines."

Admission is only $49 each day.