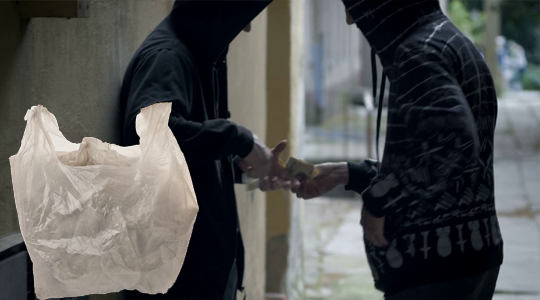 As more and more Oregon-area businesses attempt to curtail centuries of geologic evolution by mandating usage of paper bags for shoppers, not everyone is falling for the brown bag craze. Some folks, mainly those who operate outside of the law, are taking things into their own hands, literally.

"I have at least a hundred of these things under the sink," one illegal entrepreneur told Saucetown, re-questing to be anonymous. "I used to sell pot to the kids who aren’t old enough to go to the dispensaries. Now, I make a good under-the-table living selling plastic bags to people at WinCo. Have you ever tried to get on a bus, bike or wheelchair with a flimsy, brown bag, full of canned food and frozen meat? Personally, I think it’s cruel to force the poor and disabled to clean up our oceans, instead of the giant corporations who are responsible for most of the pollution. Either way, it’s fifty cents a bag and I give breaks at a dozen units."

Other residents are happy to embrace the new plastic bag law, shunning those who would oppose the use of paper to carry their groceries. "It’s really not that big of a deal," says West Salem resident Karen Smith-Baxter. "Just put down the two back seats in your Prius and remember to bring the re-usable bags from Whole Foods, which you should already own. I don’t see why everyone else can’t do this."